Ready, set, interview!  I just finished teaching two sections of “Mastering the Interview,” a class for this year’s Hudson School seniors. The seniors will have to create a resume, prepare for interviews by researching select colleges and internships, and participate in mock interviews. In that way, they will appreciate the importance of interviewing as a life skill. I will keep you posted on lessons learned.

This year, I am encountering a fair number of students who are unsure of their major or are wondering about the relationship between stated major and admissions. After all, most students change their major as they mature and learn new subjects in college. Nevertheless, the colleges to which they apply ask them about their intended major (and sometimes second or third choices).

In many cases, the college looks at the student as a candidate without regard to major. Then the student may be:

The University of Maryland describes its admissions as “major-blind,” meaning it looks at specific factors in evaluating candidates. Then, if it wants the student to be a Terrapin, it looks at the particular college to see whether the student can start there as a freshman. If admitted to Maryland but not to a specific college, the student takes “gateway courses” in that field. 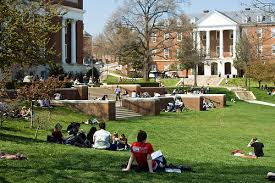 The University of Maryland is “major-blind.”

Moreover, some universities post admission criteria so that the student knows the likelihood of admission. For example, Indiana University Bloomington, very popular among New Jersey students, is home to the Kelley School of Business. It posts the minimum GPA (3.8), SAT (1300 old, or 1360 new) and ACT (30) for direct admission. An applicant will be informed about admission to Kelley subsequent to acceptance and can appeal the decision. (Appeals are not the norm at colleges, though some allow them.)

A student should not indicate a major about which he or she is not sincere thinking it will be “easier” to be admitted. That’s like applying Early Decision to a college to “get it over with,” a notion addressed in last week’s blog post. The applicant should also carefully read, or ask about, how decisions are made for admission related to particular majors.

It is totally reasonable that students have not decided on a prospective major (though they need to address their abundance of interests in any essays or interviews). Particular students will benefit from formal “Undecided” or “Exploratory” programs that welcome students who aren’t sure what they want to study, for example:

What if students could get through college without declaring a major at all? Partly fueled by the role of technology in learning, Stanford is changing the way it views the major altogether. According to Education Dive, the Stanford Project encourages students to achieve a mission rather than proficiency in a major. Now, that would be an interesting twist! Who’s thinking students will start with a particular mission and change to another?

Which college grads earn more, liberal-arts majors or graduates of pre-professional programs? The gap narrows over time, we learn in “Good News Liberal-Arts Majors: Your Peers Won’t Outearn You Forever,” an article published this week in the Wall Street Journal. Many liberal arts grads go into tech. Many run companies. Incidentally, the highest salary on the Journal chart, “How Pay Stacks Up,” was for International Relations majors. Their median annual earnings at 20+ years: $119,000. Bon appétit!

Though I counsel many pre-professional students (and love them all), I am a huge fan of the skill sets sharpened by the liberal arts: critical thinking, problem-solving, and communicating. The Journal quotes many accomplished professionals who either came from a liberal-arts background or realize how much they benefit from hiring liberal-arts grades. For example, John Kroger, the president of Reed College in Oregon, states: “College shouldn’t prepare you for your first job, but for the rest of your life.”

The Horatio Alger Scholarship, intended for students who have faced and overcome significant obstacles, is now accepting applications. Students must demonstrate financial need and meet other criteria. The result could be up to $25,000 for college.The all-important deadline for applications is October 25.

The Cooke College Scholarship is another high-profile program for academic achievers demonstrating need. It offers up to $40,000 per year! For details, click here.

I was so pleased that a sophomore stopped in to see me at Hudson the other day. We talked aspirations and colleges, and after some specifics I left her with very specific message: Do well in your courses. Indeed, the Chronicle of Higher Education backed me up regarding what’s most important to college admissions officers: GPA.

✓ Your senior should have set up the Common App.

✓ Your senior should have selected and approached teachers for recommendations.

✓ Your senior should be well along with the Common App Personal Essay.

✓ Your senior should email me with questions!

PREVIOUS POST
Have you seen the latest poll results?
NEXT POST
The Road to College Starts With unCommon Apps!
To Blog