Fall is quite the busy time in the college-prep world. As I create this post, I’m streaming the annual New York Times Symposium on College Admissions and Preparation and, on breaks, blogging, prepping lessons for The Hudson School (Interviewing; PSAT Math), and communicating with students who are in the midst of it all.

From the Times Comes Validation

Fortunately, I find the majority of the Times session validating. Some topics are those addressed regularly, for example:

Also, I was very glad that the symposium addressed some subjects that families avoid, in particular, students who:

Who says Google doesn’t own (or at least track) the world? Now, when we search for a college, Google will provide College Scorecard information alongside search results. College Scorecard is a U.S. Department of Education initiative to help students get the best results and avoid debt. According to the DOE blog, it contains “the most comprehensive data ever published about college costs, graduation rates, employment outcomes and student debt for every college.”

So when you search Google for a college, you will see acceptance rate, graduation rate, average cost for students receiving federal aid, average salary after attending undergrad, and undergraduate tuition and fees.

Caution: Take College Scorecard data for what it’s worth (sort of like ratings). Also, I tested the capability even after the new search results were supposed to go live and found inconsistencies from college to college. But you can see the names of some mascots! (Did you know that Haverford’s mascot is the black squirrel?)

Michelle Obama works on her resume, while a student doesn’t remember her name. Those scenes are part of a new video geared toward showing students and their families how easy it is to complete the Free Application for Federal Student Aid (FAFSA). The video is part of a campaign called Form Your Future. 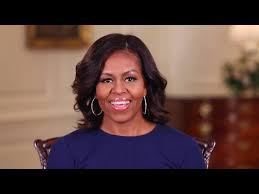 Michelle Obama plays herself in a new FAFSA video.

Message to the Student: (Rep)resent Yourself

Sometimes, students wonder what to do to separate their application from the pack, especially when applying to a large college. A suggestion: get to know the rep. If a prospective college is sending a rep to your high school, be sure your student introduces himself or herself. After submitting the application, there may be an opportunity for an email exchange. (Students are cautioned to not overdo it!)

Unigo is a great source of unusual scholarships. This month’s list includes scholarships awarded for innovative ideas about cars, the water supply, and even surviving a zombie invasion.

No matter how talented a college applicant may be, he or she shouldn’t hold out for a single college. If you student is thinking Early Decision, have some backups decided and drafted. Adding some Early Action colleges is very smart; they are nonbinding, and students get a good read on their candidacy—and hopefully an acceptance. We can thank PrepScholar for its complete list of Early Action colleges.

Early deadlines are just a month away! Seniors need to: complete the Common App; use Naviance as instructed; and share essays if they want constructive feedback.

Leaves are just starting to fall, and questions about college keep coming. You or your student should email me with your concerns.